There is no doubt that offenses in the SEC are as up-tempo and high powered as ever. Teams like Missouri, Texas A&M and Auburn have revolutionized the offensive game in the previously defensive-minded conference.

Will this trend continue in 2014? It seems unlikely with only six of the 14 SEC teams returning quarterbacks but that’s not to say that the SEC will be totally devoid of signal-callers this season. Here are our top 5 quarterbacks headed into 2014:

5. Dylan Thompson, South Carolina. Thompson is a battle-tested quarterback who has filled in admirably for Connor Shaw on many occasions through his career in Columbia. He has thrown for almost 1,700 yards during his time but in 2014, he will have to deal with the pressure of being “the man.” South Carolina is loaded with talent on offense and a steady running game led by running back Mike Davis should ensure that the Gamecock offense remains a force in the SEC East.

4.Hutson Mason, Georgia. Mason is a senior who has been groomed for this situation for the past four years while playing under Aaron Murray. A strong running game should help take some of the pressure off Mason as a first year starter although he has proven he has the ability to sling the rock around. Mason threw for nearly 1,000 yards while playing for an injured Murray a year ago and led the Bulldogs to a comeback win at Georgia Tech late in the year.

3. Bo Wallace, Ole Miss. Wallace is an established star in the SEC as he enters his third year as a starter in Oxford. Wallace had healthy numbers a year ago as he tossed for 3,346 yards with 18 TDs. He has a plethora of young talent around him which should help him succeed despite playing in the always salty SEC West.

2. Maty Mauk, Missouri. Mauk proved himself to be the real deal while going 3-1 as a starter in 2013. Mauk was forced into action as a redshirt freshman after James Franklin got hurt in the Georgia game. Mauk went on to throw for 1,076 yards and ran for 229 more in Franklin’s absence. Mauk also had a superb TD to INT ratio finishing with 11 TDs to only 2 interceptions. 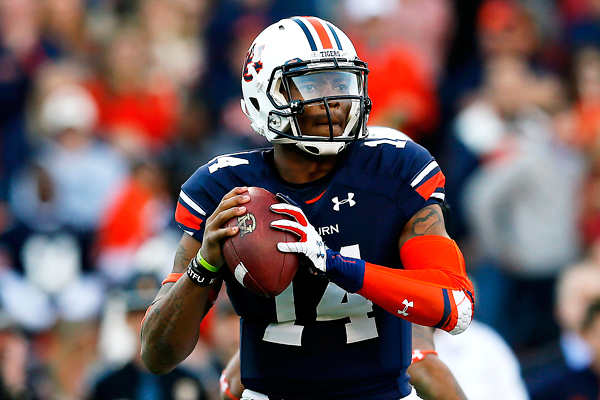 1. Nick Marshall, Auburn. Marshall is one of the top duel-threat quarterbacks in America and is coming off a tremendous season in which he threw for almost 2,000 yards and ran for another 1,000. It remains to be seen as to whether Auburn’s option attack will be as productive this year without Tre Mason in the backfield but the Tiger offense is clearly in great hands with Marshall.

Noah and Clint discuss Alabama’s national title and how college football fans should share in this championship. NFL Divisional round is here and it’s time for the Chiefs to show up. Former Redskins/Panthers RB Stephen Davis talks about his underrated career.

Everyone comes into your life for a reason; some for a season, some for a lifetime. Some good and some bad. They shape, form and can make us or break us. But in the end, they help make us who we are. Live without regrets.

People may forget what we say but people will never forget how we make them feel.~ Maya Angelou

This is an incredible breakdown.

From The Aftermath: #Chiefs QB Patrick Mahomes is in the concussion protocol, despite not sustaining a hit to the head. I'll explain 👇🏽👇🏽👇🏽

🗣 HOW 'BOUT THOSE #CHIEFS?!?! 🏈
https://gasnsports.com/chiefs-locker-room-video/

Tellem put my picture up where bron Picture was in Cleveland. #Ville