Everyone loves a good football story and more often than not, the quarterback is the focal point of the film or show. There have been good ones, bad ones and everything in between, but lets take a look at the top-10 fictional quarterbacks to ever grace our TV screens.

10. Junior Floyd, Little Giants (1994). Sure Junior was only a 10-year-old kid, but this guy single-handedly takes a group of untalented miscreants, puts them on his back and helps lead them to a victory over the vaunted pee-wee Cowboys of Urbana. You could say that he couldn’t have done it without Becky “The Icebox” but don’t forget Becky missed the first half of the big game as she decided to become a cheerleader instead. 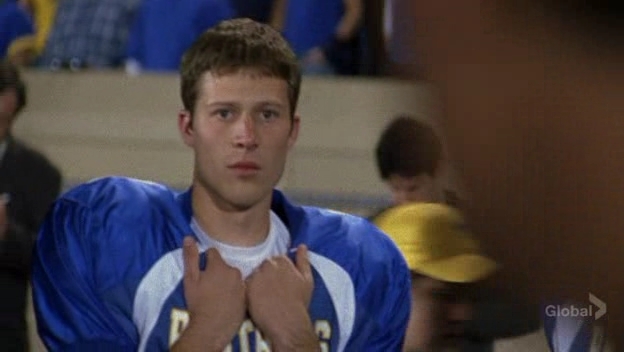 9. Matt Saracen, Friday Night Lights (2006). Saracen had a lot of obstacles to overcome to find success as QB-1 of the Dillon Panthers. He is thrust into action during the show’s first episode as incumbent star Jason Street went down with a spinal injury. Despite a shaky start, Saracen helped lead Dillon to the state championship in season one of “FNL” and although he was eventually benched in season 3, Saracen helped lead an epic comeback (although sadly it resulted in a loss) during yet another state championship appearance for Dillon. 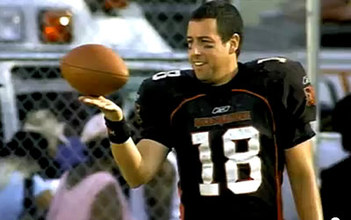 8. Paul Crew, The Longest Yard (2005). Crew was a troubled former NFL quarterback who found himself on the wrong side of the law. Luckily, Crew becomes the leader that the rest of the prison needs him to be and he helps guide the Mean Machine to a huge upset over an over-zealous group of roided up prison guards.

7. Mike Winchell, Friday Night Lights (2004). Despite being quiet, unassuming and shy, Winchell excels in the Odessa-Permian offense after the key loss of star running back Boobie Miles. Lucas Black does a nice job portraying Winchell and looks eerily similar to the real person that he was portraying. His guts and determination helped lead Odessa-Permian to the state championship game, but unfortunately the Panthers fell just short against mighty Dallas-Carter.

6. Shane Falco, The Relpacements (2000). For the sake of argument can we just assume that Falco is merely an extension to the Johnny Utah character that Keanu Reeves played in “Point Break?” Anyway, Falco helps lead a rag tag group of scrub players to the highest of highs as they heroically defeat a non-scrub professional team in dramatic fashion. 5. Jonathan Moxon/Lance Harbor, Varsity Blues (1999). And we have a tie, or more specifically we really just wanted to combine two characters from the same film to save space. Now Harbor is an established star at the start of the film and Moxon is his lowly backup. Sadly for the West Caanan Coyotes, disaster strikes and Harbor goes down with injury. The free-spirited Moxon takes over and helps lead the Coyotes to a district championship despite frequent battles with head coach Bud Kilmer.

4. Jason Street, Friday Night Lights (2006). Based off the information we are given in the first episode of the show, Street is basically the man. He is primed to be better than Peyton Manning, Roger Staubach and everyone else in between. A scout even proclaims that Street is the “best high school quarterback I’ve ever seen.” Sadly for Street, he would never find glory as a football player as a severe spinal injury ends his career at the conclusion of the show’s first episode.

3. Reno Hightower, The Best of Times (1985). Hightower may be overrated here in terms of his ability but the fact that he returns to the scene of his biggest glory 13 years after a tie game in high school speaks volumes. Many citizens in the sleepy town of Taft, California proclaim Hightower to be the greatest quarterback in the history of Kern County and one man even goes so far as to say he is the best “in the history of America.” Hightower helps the Rockets exercise the demons of the past as they defeat the vaunted Bakersfield Tigers in hilarious fashion.

2. Joe Kane, The Program (1993). Despite having issues with alcohol and reckless behavior, Kane is a clear-cut Heisman Trophy candidate as the quarterback of the Eastern State Wolves. Sadly, Cain’s struggles lead him to a stint in rehab as the Wolves begin to fall apart around him. Luckily, Cain returns to the team just in time for the big Mississippi State game (why them seriously)? Cain and the Wolves defeat their SEC foe and in doing so win the “conference championship” and become eligible for a “major bowl.”

1. Willie Beaman, Any Given Sunday (1999). Beaman emerges from the lonely bench of the Miami Sharks sidelines to become an instant professional football star. His catchy commercial will forever keep all of his fans “dreamin” and his on-field play will never be forgotten as his Michal Vick esq. style would lead the Sharks to a playoff victory over Dallas.

Check out our interview this week with our good friend @Theismann7 talking Chiefs, his new book and more! #JoeTheismann #NFL #Chiefs #HowtobeAChampionEveryDay https://www.youtube.com/watch?v=qv6jQZFUjgM

We've got all the trimmings for you on a special Thanksgiving edition of #TheElite. Check out our interview with @Theismann7 a well as Bucs defensive backs coach and former Chief Kevin Ross. https://open.spotify.com/episode/68RnjRY1irI4RIAzpurkQB?si=FGx26dVXSEShsqxaou4ddg

Chiefs look to deviate from a nasty history against Tampa.

I'm taking a look back at the Chiefs/Bucks checkered past. Chiefs are 0-5 against Tampa since Joe Montana. https://gasnsports.com/chiefs-bucs-a-checkered-history/

We are going around the #NFL this week on the #EliteSportsPodcast with our good friend @nflnetwork's @jeffrichadiha LISTEN HERE: https://podcasts.apple.com/us/podcast/around-the-nfl-with-nfl-networks-jeffri-chadiha/id1434762451?i=1000498329398

Saddest part of this is it’s a sport I love, but those in governance have devalued its regular season by the “Who’s in” model. A byproduct of the @CFBPlayoff selling out to a branding our TV colleagues in Bristol thought was best. It’s not. It’s ruined interest Nationally. Shame.

Eric Bieniemy says Le'Veon Bell reached out to Clyde Edwards-Helaire before signing with the Chiefs, saying, "I don't want to step on your toes" and seeking his approval on joining the backfield mix.