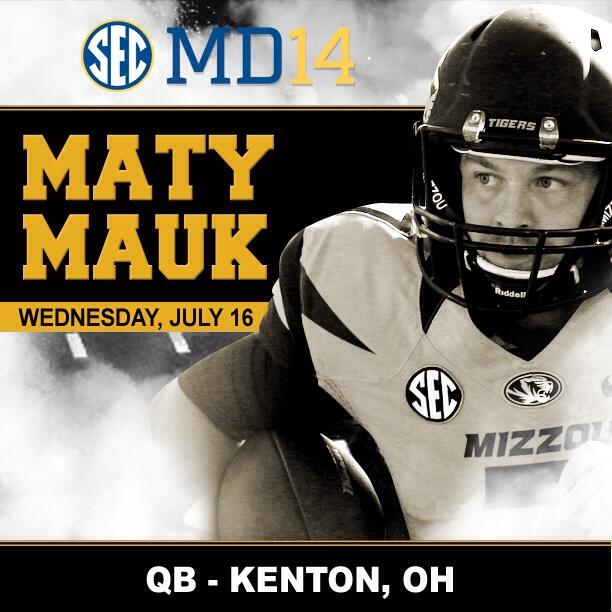 “I feel like I have the ability to do similar things, and that’s what people are expecting of me back in Columbia,” Mauk proclaimed. “The stuff he could do was unbelievable. People had never (seen) it. He could turn anything into a big play. That’s what I liked about him, and that’s why I watch him on film.”

For Missouri to successfully defend their SEC East crown, it wouldn’t hurt to have Mauk display a similar playmaking ability that we saw from the former Heisman Trophy winner. Obviously, Mauk is not saying that he IS Manziel right now, but it is clear the he possesses similar size, foot speed and has also shown a knack for making big plays while tossing 11 touchdowns to only 2 interceptions in 2013. Mauk also rushed for 229 yards and went 3-1 as a starter while filling in for an injured James Franklin. The one question mark for Missouri heading into the 2014 season will be the receiver position as the Tigers lost 70% of its pass-catching production from a year ago.

It is clear that Mauk has the pedigree to be a major star at the college level. Currently, he is the most prolific passer in high school football history as he amassed an astounding 18,932 yards passing and 219 touchdowns. And ho hum, he also rushed for 3,700 yards for the Kenton Wildcats (while being coached by his father Mike) from 2008-2011.

everyone in #BroncosCountry is talking about this potential throwback look. what's @JDavisD12 think? @NickFerguson_25 and I talk to him next on the Fan!

That man @cheetah is tooooo nice on the sticks #Madden20

Tarik Cohen is a monster ✌🏿

Sooooo many dudes in this game became pros!

We had 33 players on this team that went on to play in the NFL. 12 of them were Pro Bowlers. And they were all great people. #TBT @ESPNCFB